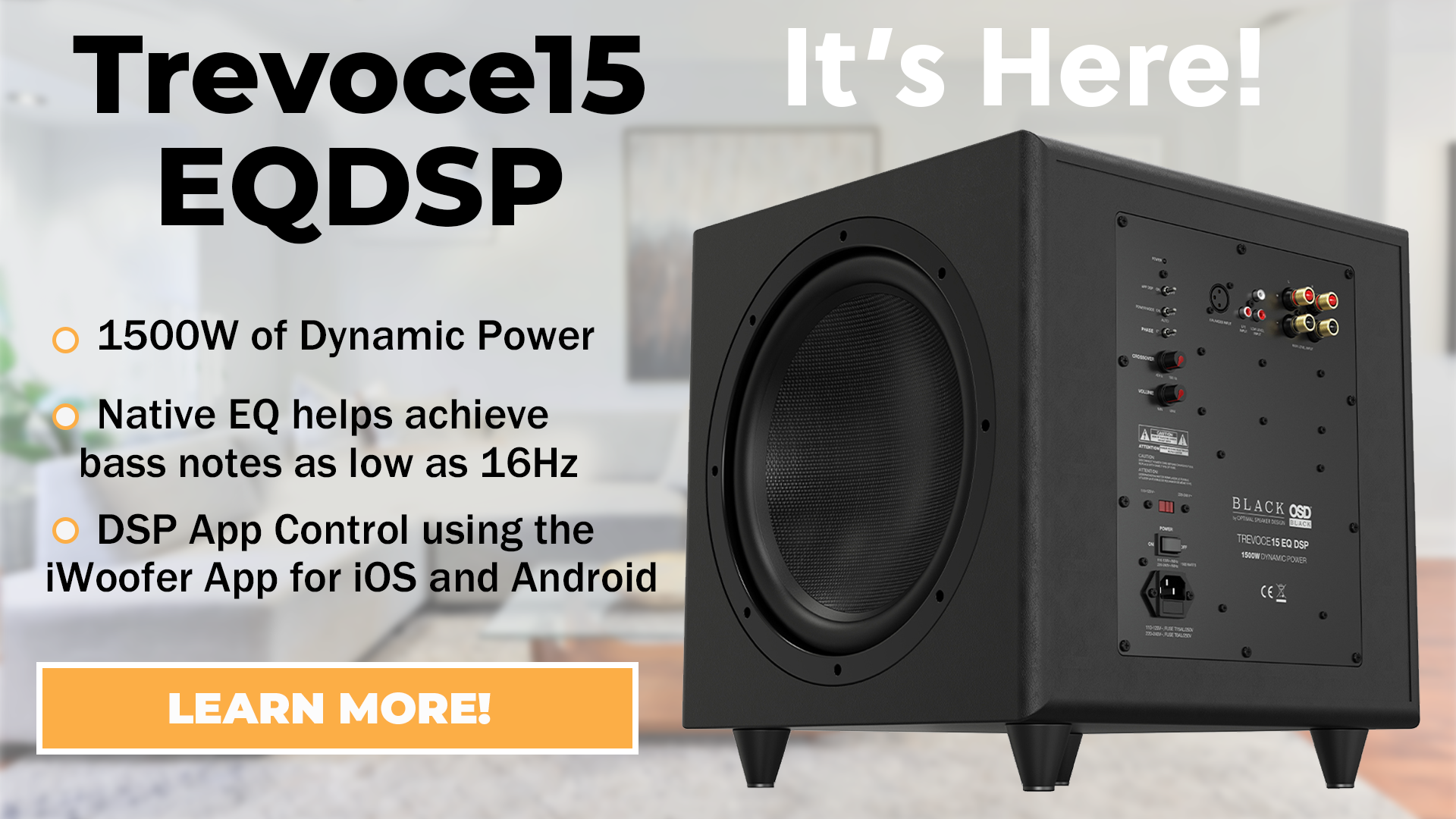 OSD Black Trevoce 15EQDSP is Here! Check it out Today

Our goal was to produce a sub $1000.00, small footprint subwoofer with very low distortion that could reach 16Hz +/-3dB and 14Hz +/-10dB and exceed CEDIA’s recommendations for reference Home Theater Audio Design Specifications.

This required over 12 months of design and engineering adjustments, including developing a new 1500W amplifier capable of delivering the control needed for a triple driver design.

Why a triple driver design? We see this design as taking the best attributes of both a sealed and ported enclosure and minimizing the downsides.

What are those downsides?

Frequency response: Sealed or acoustic suspension designs allow for smaller enclosures, but the increased air resistance inside the cabinet causes the low frequencies to start rolling off at a higher frequency at a gentle 12dB per octave. Ported or bass reflex designs are much larger, require careful port design, and while the roll-off starts at lower frequencies, it does so at a steep 24dB per octave. The twin passive drivers used in the Trevoce act as a “variable resistance” port, allowing the frequency response to go lower than a sealed cabinet, and then have a gentler roll-off than a ported one.

Distortion: Mechanically, in the Trevoce’s design, when the active driver moves at low levels or higher frequencies it “sees” only a small resistance from the passive driver’s surrounds – similar to a ported design. At higher levels and lower frequencies, as the active driver’s excursion increases, it “sees” the increasing resistance from the passive driver’s surrounds and this acoustically damps the movement of the voice coil in the magnetic cap, reducing distortion. In a ported design, the driver’s movement is “mechanically” restricted by its surround and then “electronically.” As the voice coil moves out of the magnetic cap, this causes distortion to rise.

In a sealed design, the air inside the cabinet creates resistance as the driver moves out or in. This keeps distortion low but also restricts frequency extension.

EQ: We employ two levels of EQ. The first is “native” EQ, this is fixed and has been determined by the frequency response of the drivers used and the design employed. We measured the response “anechoically,” taking any room acoustics out of the equation, and used digital parametric EQ to make the response as flat as possible (hence the flat curve you see). The second is the digital parametric EQ that is built-in and can be employed and controlled by an App. This allows advanced owners who want to experiment with additional EQ to fine-tune the at-home, in-room response. This can be done by ear or by using a microphone (not included) and software such as REW. Much has been written about bass and room acoustics, and it is a complex subject.

Our recommendation is always to use multiple subwoofers (even if budget constraints mean using two or three less-expensive ones) rather than trying to EQ one sub in an acoustically challenging room. What does acoustically challenging mean? Depending on where you place the sub in your room, you could end up with bass frequencies being canceled out or exaggerated in certain places. This is caused by reflections off walls, floors, and ceilings; from the long, low-frequency, waves coming from your sub, canceling each other out; or by doubling up. You might call these effects “Boomy” or “Dead” spots. Using EQ to rectify too much bass is relatively easy, trying to add bass to “fill in” a cancellation is not (the more you add the more it is canceled).

Used judiciously, our digital parametric EQ can help cure small low-frequency peaks and throughs. It can also be used to create a personalized, preferred frequency response, perhaps for late-night listening with reduced super-low frequencies dialed down, or for music rather than movies. Our software allows for custom settings to be saved and recalled when needed. We suggest that this is not for the novice but more for the advanced user, someone who has a microphone and is familiar with parametric EQ software.